The Calculus of Calorie Counting

In The Biggest Medical Myth of All Time, we reviewed some of the evidence that losing excess body fat is not as simple as the supposedly tried-and-true formula of eating less and exercising more.  And that’s because our bodies are not simple machines, like cars or televisions or the iPhone 3GS. In this post, we’re going to examine the calorie balance theory:   Calories In – Calories Out = Fat Lost/Gained, and build an understanding of why we can’t fool our fat-o-stats with a step-aerobics video and a freezerful of Lean Cuisines.

As far back as the beginning of the last century, scientists were questioning the simple calorie balance theory.  In 1902, researcher R.O. Neumann, experimenting on himself, showed that his body could adjust to significant changes in caloric intake, with only minimal changes in weight.  He theorized that the apparently lost calories were being given off as greater or lesser amounts of heat by his body, and called this phenomenon “luxuskonsumption” (luxury consumption).1 Since that time, the subject has been studied exhaustively, with both support and refutation for the idea that the human body can adjust to differing levels of calorie intake without fulling accounting for the ingested energy differential through changes in body mass and/or energy output.  When you sift through it all, two conclusions seem irrefutable:  1) that our bodies do indeed have the ability to adjust to sustained alterations in intake, though not in the fashion Neumann first proposed, and 2) that the means and methods of accomplishing this task are highly variable between individuals. To begin understanding the real mathematics behind calorie balance, we need to understand the parts that make up our daily total energy expenditure—the “Calories Out”—because this is the piece over which we lack voluntary control.  The acronyms and terms are constantly changing, but the currently accepted model for daily total energy expenditure looks something like this: TEE = REE + TEF + EEE + NEAT, where: Now, I should say that even this equation is a vast oversimplication, since the relationships among these variables are not independent.  EEE and NEAT both depend on REE and can be effected by TEF, and interact with each other, as well.  TEF is most often thought of as a function of REE, but also varies with the volume and types of foods eaten, as well as proximity to exercise.  That said, however, the equation makes a decent model for a given individual at a given point in time, so let us consider each of these in turn.

Much research has compared the REE between lean and obese persons, and, while slight differences are sometimes reported, for the most part, REE can be attributed to the maintenance of lean body mass—muscle, bone, skin, hair, etc.  Even highly trained athletes don’t show a significantly higher REE than couch potatoes of the same size and body composition.2 When people alter their intake acutely for a short period of time, or modestly for a long period of time, however, the REE, when measured per unit of lean body mass, will show a commensurate adjustment, albeit a small one.  Let me make that clear:  if a person has dieted (or gorged) for a suitable length of time, he will burn a different number of calories at complete rest than will a person of exactly the same size and body composition who hasn’t altered his diet.  Some studies will fail to show this, but likely only due to methodological differences (sample size, study length, measurement technique). 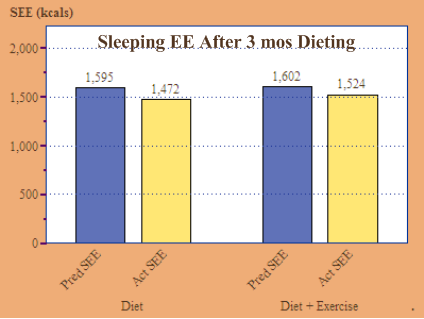 As an example, in 2006, researchers showed that the metabolic rate of mildly overweight people during non-movement sleep (a decent proxy for REE) decreased after just three months of a 25% calorie deficit, created through diet alone or diet + exercise.  In the graph, you see sleep energy expenditure (SEE) predicted from baseline SEE and three-month LBM, compared to the actual three-month SEE.  The difference is small, but significant:  7.7% for the diet-only group, and 4.9% for the diet+exercise group.  The difference persisted over the next three months, when the subjects were fed the amount necessary to maintain the three-month loss.

Now here’s where things get interesting.  As far back as the 19th century, scientists were fascinated by what was then called Specific Dynamic Action, the significant increase in metabolic rate that occurs when we eat and for several hours after.  Early researchers observed that TEF varied with the size and composition of the meal and so logically drew the conclusion that TEF represented the energy cost of digestion and assimilation of the meal, which is how it is still often defined today.  This isn’t entirely accurate, however.  Researchers began to notice that there were significant variances in TEF between individuals, even when eating the same exact meal under the same circumstances.  That fact suggested that TEF was not solely the processing cost of food. 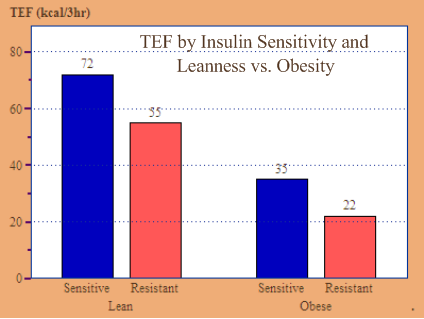 In fact, many studies found that TEF was consistently higher in lean vs. overweight folks, which led to explorations of what else might be involved in TEF.  In a series of elegantly designed experiments, Dr. Karen Segal and her team showed that insulin resistance and body fatness are independently and negatively associated with TEF.  In this image, we can see that insulin-sensitive, lean persons burn considerably more calories in response to a given meal than do insulin-resistant or obese persons, matched for LBM and RMR.  Clearly, there is much we have to learn from studying TEF, even if it is a relatively small portion of our daily TEE, and I’ll get into that more deeply in another post.

The calories burned as a result of activity over and above REE can be divided into Exercise Energy Expenditure (jogging, tennis, pilates, etc.) and Non-Exercise Activity Thermogenesis (showering, fidgeting, channel-changing).  The former is pretty straight-forward; it’s basic physics:  work = mass X distance and force=mass X acceleration.  The distance you move something—like your arm or a barbell—through space, and the force you use to do so can be combined to calculate the calories burned in the process.  Okay, there’s a bit more to it than that, as there are effects from exercise training and efficiency, and interactions with the fuel source (sugar or fat), but for the most part, moving a given weight a given distance at a given intensity has a set value, regardless of our body’s fat content. The same could be said of NEAT, except for one important difference.  For most of us, EEE is the result of a willful, conscious act; whether we enjoy the activity or not, we make the decision to spend 30 minutes or an hour or the whole afternoon playing golf, painting the den, or using the elliptical trainer.  NEAT is much more about unconscious movements—the number of times we get up and walk to the window to look outside, how often we feel the urge to head to the water cooler for a gossip-fest, whether or not we are drumming out our favorite song on our desk while reading email—in short, how inclined we are to fidget, pace, or otherwise “waste” energy. So why do we make this distinction?  Because our inclination toward non-exercise activity is a key element in balancing the energy expenditure equation.  Let’s look at some science behind that statement.  A group of researchers at Mayo Clinic was given a great deal of credit for their research into the NEAT concept about a decade ago, but in reality, the idea of compensatory changes in NEAT goes way back to the mid-twentieth century. 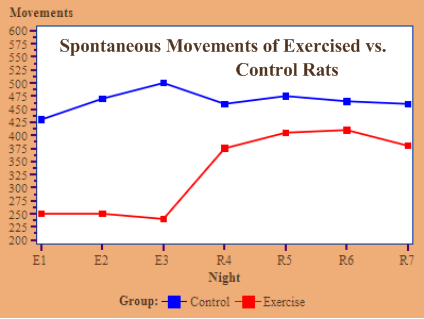 In a delightful study performed just down the road at UNC-Chapel Hill, a group of Sprague-Dawley rats (a strain of rat disinclined to high levels of activity) showed researchers what happens to NEAT when sudden changes are made in EEE.  The scientists forced the rats to run on little rat treadmills for a specified distance and at a specified speed for the first three days of each week, then allowed them to rest the other four.  This experiment went on for five weeks, and during the final week, spontaneous activity of the animals was measured during their non-exercise period and compared to matched controls.  What the researchers discovered was quite fascinating.  Spontaneous activity was greatly reduced on the three exercise days and modestly reduced on the four non-exercise days.  That is, the forced increase in EEE was compensated for by an unconscious decrease in NEAT.  Furthermore, following cessation of the experiment, there was a “persistent depression of spontaneous activity” for “a very considerable period of time”.  The rats’ little bodies were battling back against the attempt to use a lot more energy than they were naturally designed for. “The dieter’s playground” So what is all this telling us?  Well, the next time someone refers to weight loss dieting as a roller coaster, you can correct them—it’s not a roller coaster, or a merry-go-round, and it’s certainly not “The Fun House”.  It’s more like a see-saw—the harder you push down on your end, the higher up you’re going to bounce when your body pushes back.  In my next post, The Real Bathroom Scales, I’ll review a detailed example of how the elements of the energy expenditure equation respond to overeating in different body types.