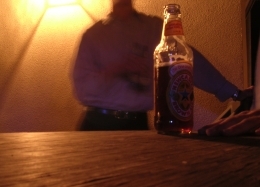 “Charlie, hit me again. Please.”
Charlie cocked a brow at the man seated at the end of the bar. “Don’t you need a little break, Spidey? That’s three in an hour, fella. Give ’em time to digest, for God’s sake.”
“Do I tell you how to pour, Charlie?” But the stocky man knew when he’d been cut off. He huddled over his empty glass, then glanced surreptitiously around him at the almost empty room. Little early yet for the regular Thursday night crowd, but vigilance had become a habit with him. He had seen that Doc guy—the PsyOps dude—a couple times, and he was making sure to keep out of his way. Wasn’t sure if the guy knew he was involved in the whole mess, but he didn’t want to find out the hard way. The guy had made him nervous enough when he’d thought it was all just a little drunken machismo, but once he’d figured out the truth about Doc’s gal…sh*t, he knew he was lucky to be alive, and he wanted to stay that way. And he had never forgotten that he had her to thank for that. Maybe someday he’d thank her for the ten grand he now had hidden in his grandmother’s basement. Not that he hadn’t earned it. Fair and square. He was an honorable fellow.
So why did he still feel so lousy about the whole thing? He’d done the best he could, hadn’t he? Under the circumstances. If he hadn’t done what he did, surely it would have been worse for her, right? ’Course, what could be worse than having your gray matter grilled? Looked like the lady still didn’t know her own name. Third Street. Jesus. Not like she didn’t know how to take care of herself, but…three against one? Nobody likes those odds. Then again, maybe she didn’t know how to take care of herself. Not anymore. Not with a hard-boiled head. A toasted tomato. The stocky man grimaced.
Such a nice lady, too. Maybe he should’ve done more to help her. Or maybe he should’ve moved to another town. Still could. He was bound to run into one of those PsyOps people sooner or later, just like he did today. And the next one would probably kill him.

Color Me Grey by J.C. Phelps. $2.99 from Smashwords or $.99 from Amazon. From the cover: Meet Alexis Stanton, a 5′ 4″ petite young woman with a yen for adventure. She grew up as a tomboy wishing she could have all the adventures boys could have. She has since decided that being a boy instead of a girl has its advantages, but being a woman is much better. She finds that job she could “just die for”… and it looks like she just might! Approx. 80K words. J.C. Phelps’ Color Me Grey is the first of a three-book series about Alexis Stanton, a spoiled rich girl who decides to trade in her easy life as a data processor living off Mom & Dad for one of action and adventure, by embarking on a new career with a mysterious company where everyone is code-named a color–Mr. Black, Mr. White, Mr. Red. Alexis, code-named Ms. Grey, is the first woman to join this team of highly trained professionals and quickly shows up the men with her skill, daring, and never-quit attitude. Much of the book is devoted to the details of Alexis’ training as a fighter, scuba-diver, and survivalist, and only becomes a true action/adventure novel near the end when she joins the team on a rescue mission that hits close to home. The novel is strongly pro-female in that Alexis is continually shown as being at least as capable, if not more so, than her male colleagues, which for me, was a bit unbelievable. That a petite woman could take down a trained male opponent twice her size, while intoxicated no less, was one of several points I had to take on faith, but for younger female readers, Alexis would likely be inspirational. The book also includes hints of romance, but in this volume at least, nothing that comes to fruition. Color Me Grey is written in the first-person, past tense point-of-view, and at times, a bit stream of consciousness. I’ve said before I’m not a huge fan of first-person POV, but it does lend a youthful, up-to-the-minute air to this novel. The writing itself would benefit from some additional editing, as it suffers from occasional bouts of over-explaining, a few spelling errors, and some misused phrases. I would also prescribe a healthy dose of commas for the longer sentences. Editing issues aside, however, if one enjoys adventure novels where the focus is more on action and less on character and relationship development, Color Me Grey will be just what the doctor ordered.

Reunion by J.L. Penn. $2.99 from Smashwords or $2.99 from Amazon. From the cover: Reunion is a lighthearted and witty yet suspenseful story about how an innocent Facebook reunion with an old high school crush turns one woman’s life upside down. Will she remain faithful to her steadfast husband, or will she succumb to nostalgic desire for the one that got away? Approx 82K words. J.L. Penn’s Reunion is longer than a typical romance or “Chick Lit” read at 82,000 words, yet never feels so, due to the smooth pacing throughout most of the book. Only the first couple chapters seemed bumpy and unpredictable to me; after that, the scenes and the plot unfolded quickly and held my interest throughout. The book is written in first-person, present-tense, which I personally dislike, but must admit, gives the story an ultra-modern polish, entirely appropriate for this tale of virtual flirtation and temptation and where they may lead. While the content is not appropriate for young audiences, neither is it overtly sexually graphic, and handles the necessary sexuality gracefully. The one bone I would pick with this author is with her consistent failure to use commas before conjunctions that join complete phrases. While I firmly believe a fiction author can and should bend grammatical rules to suit his story, his characters, and his voice, this particular omission makes it difficult to read the longer sentences and seems like more of an oversight than an intentional stylistic choice.  That one minor flaw probably only caught my eye, however, because the book is otherwise so well edited. Overall, Reunion really hit the spot for me with its delicate balance of drama and humor.  It is not laugh-out-loud funny from start to finish, but I did find myself chuckling, giggling, and grinning throughout the story, while simultaneously feeling pensive, thoughtful, and at times, even a bit misty-eyed. I eagerly await the next production from J.L. Penn.

Healing Touch by Jenna Anderson.  $0.99 from Smashwords or $.89 from Amazon.  From the cover: Divorced mother of one, Tracy Campbell is trying her best to stay out of small town gossip. A mysterious lump on her throat is making it hard. Handsome Dr. Jeremy Nelson is making it harder. Approx. 23K words. Healing Touch is a light, quick read that should probably be classified as a novella. It is a sweet romance dealing with the heroine’s inner conflict about her own lovability and her fear of being the subject of gossip and derision in a small town. The book moves along at a nice clip, without getting bogged down in backstory before pulling the reader into the current action. Told in the first person, the tale clearly presents the heroine’s point of view, but fails to do the same for the hero. I found myself not entirely convinced that the relationship would endure, as I wondered, just as the heroine did, exactly what she and the good doctor had in common. I was also a bit frustrated with the lack of final editing, which left a number of minor typos in the text and a bout or two of rapid summarizing, which should have been expanded into full scenes. Those particular flaws notwithstanding, however, the book’s ending still left me smiling and glad to have invested the time.