The Kissing Room by Cheryl Anne Gardner. $1.99 from Smashwords or $1.99 from Amazon. From the cover: Merle tells us her tale of love, longing, and desperation. As she struggles with the guilt over her husband’s suicide, Merle’s gut wrenching quest for redemption takes her on a downward spiral into a hell of her own making. Resigned to a life of self-mutilation, abuse, and despair, will she find hope in a mysterious stranger, or will she die? Approx. 16K words. I recently had the pleasure of reading Cheryl Anne Gardner’s The Kissing Room, a novella of only 16K words. The Kissing Room is not a light, cheery romance for a Sunday afternoon; rather, it’s a dark, disturbing story that threatens to repel the reader with its brutal honesty, but compels him to read on, anxious for resolution. Consider yourself warned—if you dare to sample the first page, make sure you’re in a comfortable chair. This fast-paced story is hardly a chronological one, beginning in the middle of the action, and then alternating between what happens next and what happened before. The story also fluctuates frequently between gentle, romantic, or bittersweet moments and truly ugly, stomach-churning scenes of violence and despair. I would add, however, that even the nastiest situations are not described graphically or in lengthy detail, though neither are they for the faint of heart. The Kissing Room is told in the engaging, first person voice of Merle, a woman whose short life has already seen too much tragedy, making her wizened and weary beyond her years. While the reader may not agree with her choices or even understand her reasons for making them, it is impossible not to sympathize with this character and want to see her prevail. The character of Lain was less clear to me, and I wasn’t always sure I liked him, but that did not seem important; I was rooting for Merle, and if he made her happy, that was all that mattered. The Irish pub setting of the story is unique and authentic, with both the language and the details bringing it to life. I could always see and feel the story happening as though I was a participant, rather than some disconnected voyeur. The only time I felt thrown out of the story was when the point-of-view suddenly shifted from Merle to Lain for a brief passage near the end. I understand why the author did this, but for me, it broke the spell. Fortunately, I was so caught up in wanting to know what would happen, I just ignored it and went on. I think I’ve made the point that The Kissing Room is not exactly a “beach read” with its violence and macabre themes, but I don’t mean to imply that you will not enjoy it. I read the book nearly straight through, and only stopped because of an unavoidable interruption. I was annoyed to have to pause the action going on in my head, and went back to it as soon as I could—I just had to see how it would end. When it is all said and done, Cheryl Anne Gardner’s The Kissing Room is a deeply touching love story; you just won’t know it til it’s over. 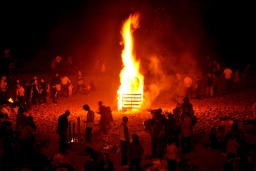