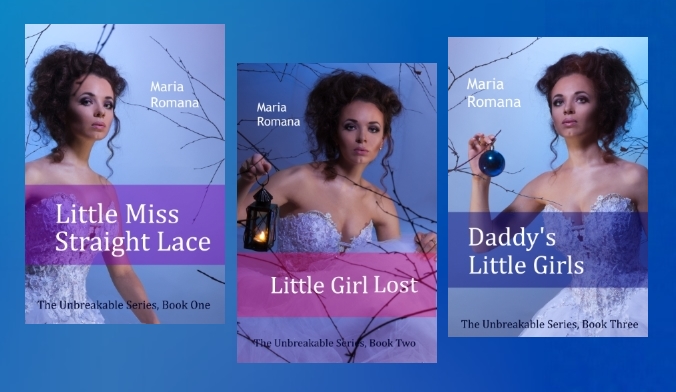 Conventional ebook publishing wisdom has it that changing up your covers every so often is a good marketing move. You can revitalize an older book or series and draw in new readers by giving your product a whole new look, or so the recommendation goes. If it works for politicians and fast food restaurants, it ought to work for ebooks, right? Well, I’m not sure I follow the logic, but you’d be surprised—even covers that you once drooled over start to look old and tired when you’ve seen them too much. So, just to relieve my own eye fatigue, and in celebration of almost ten years since I started the first book in the series (Little Miss Straight Lace), I’ve invested in a beautiful new set of covers for my old standy-by, Unbreakable. Remember, if you haven’t read it yet, the first book is free, so grab it now and try out the new skin!

Rogue Wave by Maureen A. Miller. $.99 from Smashwords or $.99 from Amazon. From the cover: U.S. Geological Survey expert, Nick McCord cannot account for the destructive waves assaulting the Windward coast of Oahu. The only viable culprit is the new housing development, Manale Palms and its attractive contractor, Briana Holt. Try as he might to find blame with Briana and her site, the truth remains a mystery as yet another threatening wave attacks the coast. Now allies, Nick and Briana narrow in on the source of these anomalies and find themselves in a struggle to save the island coast and their very lives. Approx. 70K words. Maureen Miller’s Rogue Wave is a romantic suspense that takes place against the lush, exotic backdrop of the Hawaiian Islands. Ms. Miller’s style reflects that beautiful background, bringing an almost lyrical feel to the narrative, despite the harsher realities of the storyline, which includes conflict between modern beachfront developers and conservationists, along with some present-day pirating. Ms. Miller presents her setting with a deft hand, describing scenery pithily, yet poetically: “Beyond Aloha Tower, the ocean was turning dusky rose under a violet twilight. The lights of the marketplace flickered on, and further beyond, a freighter moored at Sand Island became an illuminated hulk on the dark horizon.” With characters, she is equally clever, breathing life into not only the traditional good-looking, intelligent hero and heroine, but also the quirky side-kicks and troublesome family members. The central conflict in Rogue Wave is a series of unexplained mini tidal waves that are threatening the coast of Hawaii. As the story unfolded, I was intrigued by the underlying mystery, and would have liked more of that. It seemed that the focus was more on the relationship between the hero and heroine and less on the bad guys’ shenanigans, which I wanted to know more about. In other words, the plot was more like that of a traditional romance than I personally would have liked, but for traditional romance fans, it would be spot-on. From a technical standpoint, the story was well done, with no clunky transitions or shoddy plot holes, and no more than one or two typos. My one complaint was the frequency of point-of-view switches in the scenes between the hero and heroine. While I am a huge fan of multi-character POV, I prefer to spend more than a couple paragraphs at a time in any one character’s head, else I begin to suffer the onset of multiple personality disorder. That little detail aside, if you are in the market for an elegantly written romance mixed with an intriguing mystery, Maureen Miller’s Rogue Wave will not disappoint.

Not What She Seems by Victorine Lieske. $.99 from Amazon. Not What She Seems is a sweet romantic suspense, appropriate for all ages. Back blurb: Steven Ashton, a billionaire from New York, and Emily Grant, on the run from the law…and when they meet he can’t help falling for her. What he doesn’t know is that interfering in her life will put his own life in danger. Contemporary romantic suspense is probably my favorite type of book, but only if the plot is complex and unpredictable, and the tension is balanced with some lighter scenes and/or humorous moments. Victorine Lieske’s Not What She Seems gets high marks from me in both of these categories. Now, for about the first quarter of the book, I was not impressed. There were only a few important characters, and I thought I had the whole plotline figured out lickety-split. I was wrong. At about that point, the story underwent the proverbial “plot thickening”, like a well-made holiday gravy. Many more locations, characters, and twists and turns began to unfold, and the initially simple plot turned into a roller coaster ride with no easy exit (I actually read everything beyond the first chapter in one 24 hour span). A plethora of potential suspects presented themselves, all with reasonable motives and opportunity, such that I was reminded of a lively round of “Clue”, where everyone from Miss Scarlett to Colonel Mustard was looking good for the deed. With all of those characters and locations, however, I would have liked to have seen a little more development of personalities, interrelationships, and time spent on setting. But I may be alone in this; many readers prefer the fast-paced, plot-focused novel and find the other elements merely a slow down. As this is an indie published work, I was prepared for formatting and technical difficulties in this book, but instead, it was as free of those problems as any traditionally published novel I’ve seen. I only spotted two or three spelling/grammatical errors and no noticeable point-of-view gaffes. There were a couple of minor plot elements that struck me oddly (why did Emily go to the trouble of getting a fake SS number, but continue to use her real name?), and I found the action at the climax scene at Vincent’s house a little confusing, but these were minor flaws that didn’t detract from the overall effect. Finally, as mentioned, I appreciated Ms. Lieske’s moments of humor that broke up the otherwise breakneck pace. She made me laugh out loud more than once, notably at the “Spiderman sheets” comment. If you are a reader who enjoys steady action, a complex plot that keeps you guessing, and prefer to go easy on the life histories and weather reports, your money will be well-spent on Victorine Lieske’s Not What She Seems.