Pixel of Ink Gets Into Sample Sunday

By Madeline Plimpton | March 20, 2011 - 1:55 AM |August 7, 2011 Sunday Samples
“Sample Sunday” is a weekly treat for readers in search of new books or new authors. One way to find free samples is to search the Twitter hashtag #SampleSunday. Another is to head over to Pixel of Ink, a popular blog for ebook readers, which hosts its own Sample Sunday event via Facebook. Here is a Sunday Sample of Maria Romana’s Little Miss Straight Lace that was recently linked on Pixel of Ink’s page. 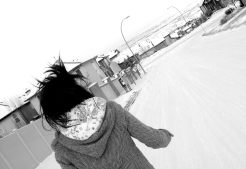 When Nic returned to the balcony, Nina was bending over the half-wall, apparently looking for Josie. Robert grabbed her around the waist and pulled her back upright. “Hey, Babe, take it easy. I don’t want you to fall. She’ll get here.”
“You see her now?” asked Nic.
Nina spun around and looked at him. She tilted her head. “Purple. I like it, Nic. You needed some color.”
Nic ran his hands down the front of the golf shirt and said, “Josie gave it to me.”
Nina grinned. “Well, aren’t you two cute?” Then she pointed in the general direction from which Josie was apparently coming and added, “Because she’s wearing some lavender dress she said you bought for her. Awwwww.” Nina batted her eyelashes furiously.
“Oh, so that’s her,” said Robert, now leaning on the half-wall himself, and pointing. “Gee, and I thought she was that big lady in the yellow tent dress.” He started laughing at his own joke.
Nic joined them at the half-wall. “Oh, you are so funny, Robert. Now you know why Josie could not drag herself out of bed this morning to meet you before we left.”
Robert turned to Nic and gave him a cockeyed grin. “Somehow, Nic, I doubt my sense of humor has anything to do with how incredibly exhausted your girlfriend always seems to be.”
“Or how hungry,” added Nina.
Nic tried to scowl at them, but couldn’t keep the corners of his mouth from turning up.
Robert pressed a hand down onto the half-wall, and pushed his bangs off his forehead again, as he looked out. “Hey, I can see her pretty well now. Gee, she’s really cute, Nic.” He waved to her. Josie’s walk slowed, and she seemed to stare at him oddly. “Uh, yeah—she doesn’t have a clue who I am. Nic, you wave.”
She was still some distance away and kept coming. Nic waved at her as she crossed the boardwalk and approached the building. He called to her, “Hey, Jos, come on up, honey. You are missing the sunset.” He beckoned to her, but her eyes were focused on Robert. She stopped walking and just stood.
Nina called to her, “C’mon, Josie. We want to open the wine.” She turned to Nic, “What’s wrong? Why did she stop?”
“I don’t know.” He beckoned and yelled down to her again, “Josie! Sweetheart. Come on!” Josie’s gaze drifted over to Nic for a moment. She looked a little pale. Then suddenly, she spun around and headed back the way she’d come, breaking into a run. “JOSIE! Wait! Come back! What the hell is she doing?”
“Maybe she left something on the boat?” offered Nina.
Nic started across the balcony. “I’m going after her.”
“Just wait a minute, Nic. I’m sure she’ll be right back,” said Robert.
But Nic was already at the French doors. “Uh-uh. It is getting dark.” Then he stopped and stepped back to the umbrella table. He snatched his cell phone off it, and added, “Something is not right.”